It is recommended to watch this video in HD mode

The high speed photography Matrix is a project that came to my mind and I think it is a world first.

Normally, in order to create a bullet time effect (like in the Matrix movies) a battery of stills cameras was placed in a circle and both a green screen and clever triggering software were used. I had a budget of exactly 0 dollars so I did it a bit differently.

High speed photography is a technique that uses electronic sensors. The sensors are connected to the flashes and activate it in the exact moment we need it. To sync all the cameras we shoot with a long exposure of 5 seconds in a dark room. The flash (activated by the sensors) were the only light source recorded by the cameras sensors. To read more about the photographing process and all the tricks we used you can visit this post in the DIY Photography blog.

In the editing process I had a lot of help from the guys from Rotary View. Rotary view is a website that allows you to photograph the same object from different angles and build a 3d viewer of that object. This is great for both product photography and showcase. This allowed me to upload all the ready photos to Rotary View and make a 3D controllable slider of each scene. all the scenes are available here

The editing process was a major challenge. First of all I have never edited something like that, and there are no tutorials on the subject. Before any editing could be done I filtered the 20 + gigabytes of data and left only the pictures of the sequences. Then I created a folder for each sequence and copied all the relevant pictures naming them by the camera number.

I opened each folder using Adobe Lightroom and created a custom preset that I applied to the photos in the sequence. I have also edited photos that were taken with wrong parameters, so they will match the others. All photos were taken in RAW format, so changing the WB was easy, the focal length was dealt with in the aligning part so basically I just changed some aperture (F) mistakes that people had made. After all that, I saved the results in a TIFF format for maximum quality.

The sequences were sent to the Rotary View Guys and we decided which I will edit and which they would.

I did the editing in Photoshop, putting each image on top of the other and matching them by making the top layer half transparent and free transforming it to match the layer beneath, the ping pong balls we hang in the photo shoot helped a lot. Rotary View edited the sequences in Adobe After Effects –  it’s a video editing program that has a tracking function. It allows you to select a point or two in each frame and it will automatically align the frames by matching the points. Here is a capture from the program showing the path of the trackers. 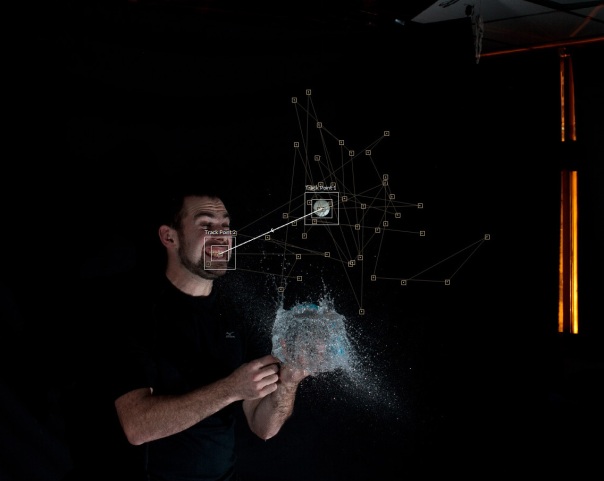 After all the aligning was done I started the final color matching process. Although all pictures were taken with the same focal length, WB, and ISO and edited with the same preset in Lightroom there were a few differences in the colors, that is because each camera have a different sensor. The editing was done by putting all of the frames one on top of the other in Photoshop and going through each frame, sampling a black, white, and a middle point in the curves function. Then going manually to each frame and performing fine tuning with the brightness\contrast and hue\saturation functions. The final part of the editing was masking each frame and eliminating the background.

The song used in the video is TYP – 20 Seconds. An Israeli band that I heard on the radio, I sent them an e-mail asking if I can use the song and to my great surprise they agreed.

I want to thank all the people who helped me with this project, the people who came to the photo shoots (I won't mention names because I lost the list and I don’t want to forget anyone), the friends who saw earlier versions of the project and gave their honest opinion and review.

Ron Viner – my younger brother who helped a lot in the photo shoot and did a lot of the dirty work in the editing process.

Rani Moskovitch – the man who taught me how to photograph and helped tremendously in the photo shoots, the way he controlled the crowd and organized the people was simply amazing.

Yuval Feder – the head of the Galitz Photography club who believed in me and gave me a chance to create something original knowing that I never did something like that before.

Gal Rotem – the man with the Rotary vision. Who was so kind and gave me a lot of helpful tips and of course all the editing help with the sequences and final movie.

Timna Segenreich – the brave girl who volunteered to participate and got wet and almost sick for the sake of art.